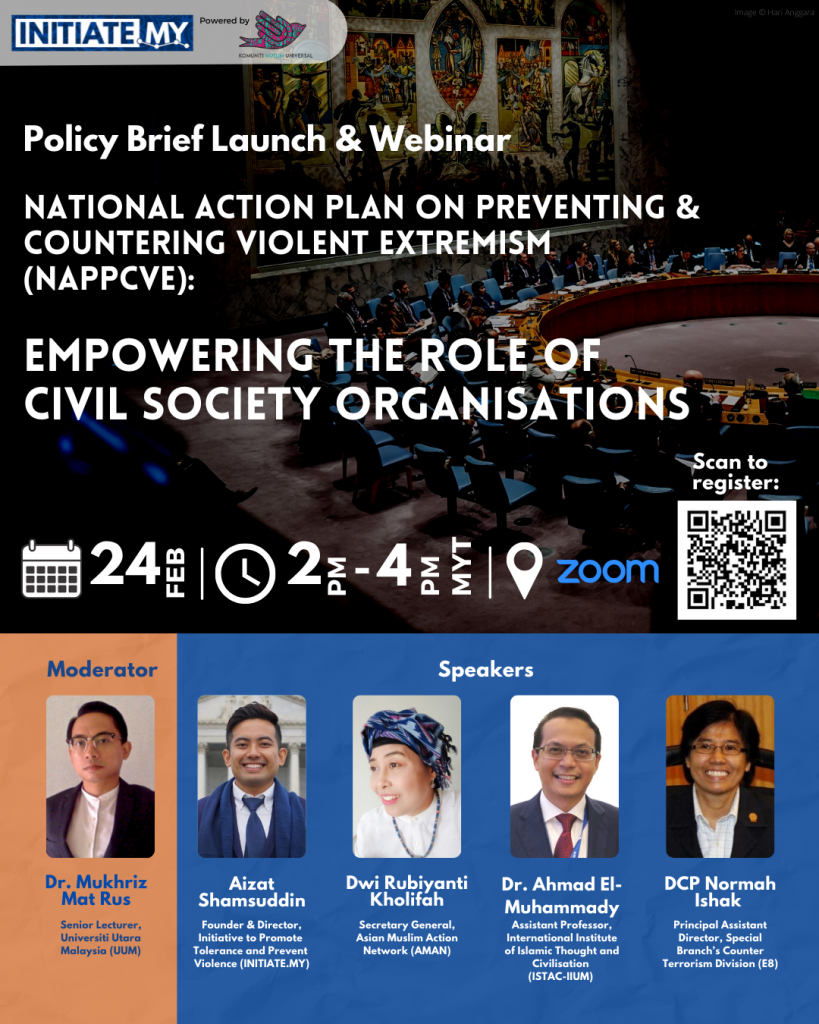 The mandate to develop the National Action Plan on Prevention and Counter Violent Extremism (NAPPCVE) is derived from the United Nations General Assembly 70/674 in 2015 to address the changing threats of violent extremism. Many countries have come up with their own action plans, among them Indonesia (2020-2024) and Kenya (2020-2024). At the time of writing, Malaysia is still developing its NAP under the purview of the Home Affairs Ministry, with the launch expected in the first quarter of 2022.

The mandate puts forward an interdisciplinary “All-of-society” and “All-of-government” approach. Hence, civil society organisations (CSOs) are one of the key stakeholders in combating extremism and promoting peace. However, in the Malaysian context, more efforts are needed to empower the role of CSOs to achieve the overall success of NAP.

This webinar will present and explore the urgency of developing the National Action Plan for Malaysia and the role of CSOs in the development and implementation of NAP. Furthermore, viable recommendations to boost cooperation between a wider CSOs and government bodies/agencies based on the best practices learned.

Dr. Mukhriz Mat Rus is a Senior Lecturer at the School of Law, College of Law, Government and International Studies, Universiti Utara Malaysia (UUM). Before joining the academia, he served at the Attorney General’s Chambers, Malaysia as Deputy Public Prosecutor (2008-2015). He is also a qualified advocate and solicitor (Malaya). Mukhriz obtained LL.B (Hons) in 2007 from the International Islamic University of Malaysia, and later LL.M from the National University of Malaysia in 2014. In 2019, he completed his Ph.D.(Criminal Justice & counter-terrorism) at School of Law, University of Leeds, United Kingdom. His doctoral research is about the criminalization approach in Malaysia’s counter-terrorism strategy. His areas of expertise and interest include international and domestic criminal law, criminal justice, counter-terrorism law, and human rights law.

Aizat is an analyst and practitioner in the prevention of violent extremism (PVE), good governance, and human rights. Since 2015, he is the founder and project coordinator of Komuniti Muslim Universal. It was founded by former radicalised youth to counter extremism through counter-narratives, dialogues and preventive policy engagements in Malaysia and Southeast Asia. In recognition of his work in peace and security, he received Australia Awards scholarship from Australian Department of Foreign Affairs and Trade and ASEAN in 2018. Then, he completed his master’s degree specialising in counter-terrorism, conflict studies and political Islam from the University of Melbourne in 2020. As part of his global network in counter-extremism initiatives, he is an alumnus of German Institute for Foreign Cultural Relations and American Council of Young Political Leaders since 2018. Aizat is also trained in Sharia and law for 5 years at the Islamic Science University of Malaysia. His altruistic hope is to make the world a better place.

Dwi Rubiyanti Kholifah (Ruby Kholifah) is Secretary General  of the Asian Muslim Action Network (AMAN). Her engagement in women peace and  security started with the Indonesia program in 2007. With AMAN in Indonesia, she initiated Women School for Peace to facilitate a leadership incubator for women to strengthen community resilience through the role of women. Managing 39 Women’s  School for Peace in 7 provinces of Indonesia, has involved more than 1500 interfaith  mothers as leaders of change. In implementing UNSCR 1325 on Women, Peace and  Security (WPS), AMAN has been actively facilitating constructive engagement of CSO into the decision making process. As part of the drafting committee of National Action Plan (NAP) 1325  in Indonesia, AMAN has facilitated localisation of NAP 1325 (RAN P3AKS) into 15  provinces in Indonesia.

Dr. Ahmad is an Assistant Professor at the International Institute of Islamic Thought and Civilisation (ISTAC-IIUM). Besides that, he holds various external positions such as Associate Fellow at the International Centre for Counter-Terrorism (ICCT), The Hague, Netherlands; International Advisory Committee Member at Global Peace Institute (GPI), United Kingdom, Associate Research Fellow at the Accounting Research Institute (ARI), Universiti Teknologi MARA (UiTM), Malaysia, and Deputy Director, Alumni Relations Division (ARD), IIUM. Since 2011, he works closely with the Special Branch’s Counter-Terrorism Division, Royal Malaysia Police and Prison Department to implement the Rehabilitation and Deradicalisation programs for individuals detained under terrorism laws in Malaysia.  He is now a Co-principal investigator for a two-year research at the IIUM- ISTAC’s Extremism Analytical Unit in collaboration with the National Consortium for the Study of Terrorism and Responses of Terrorism (START), University of Maryland (2018-2020) and consultant to the Ministry of Home Affairs (MOHA) to develop National Action Plan for Preventing/Countering Violent Extremism (NAPPCVE) in Malaysia.

Deputy Commissioner of Police (DCP) Normah Ishak has served in the Special Branch of the Royal Malaysia Police (RMP) for 30 years. She spent the first 12 years of her service in the area of counter-espionage and counterintelligence. DCP Normah then ventured into protective security where she was deeply involved in a wide range of protection work in various capacities including physical protection of key infrastructures. She spent a total of 11 fulfilling years in protective security, during which she had the opportunity to contribute in ways that have resulted in significant outcomes for some of Malaysia’s landmarks and major infrastructures. From April 2016, DCP Normah has been serving in the field of counter-terrorism where she plans, coordinates and executes security operations against terrorism threats in Malaysia. Throughout her years with the RMP, DCP Normah received training in  nuclear security matters and has participated in many engagement activities organised  by the International Atomic Energy Agency (IAEA). DCP Normah is also an alumna of  the FBI National Academy. She is currently the Principal Assistant Director in charge  of the RMP’s Counter-Terrorism Division.