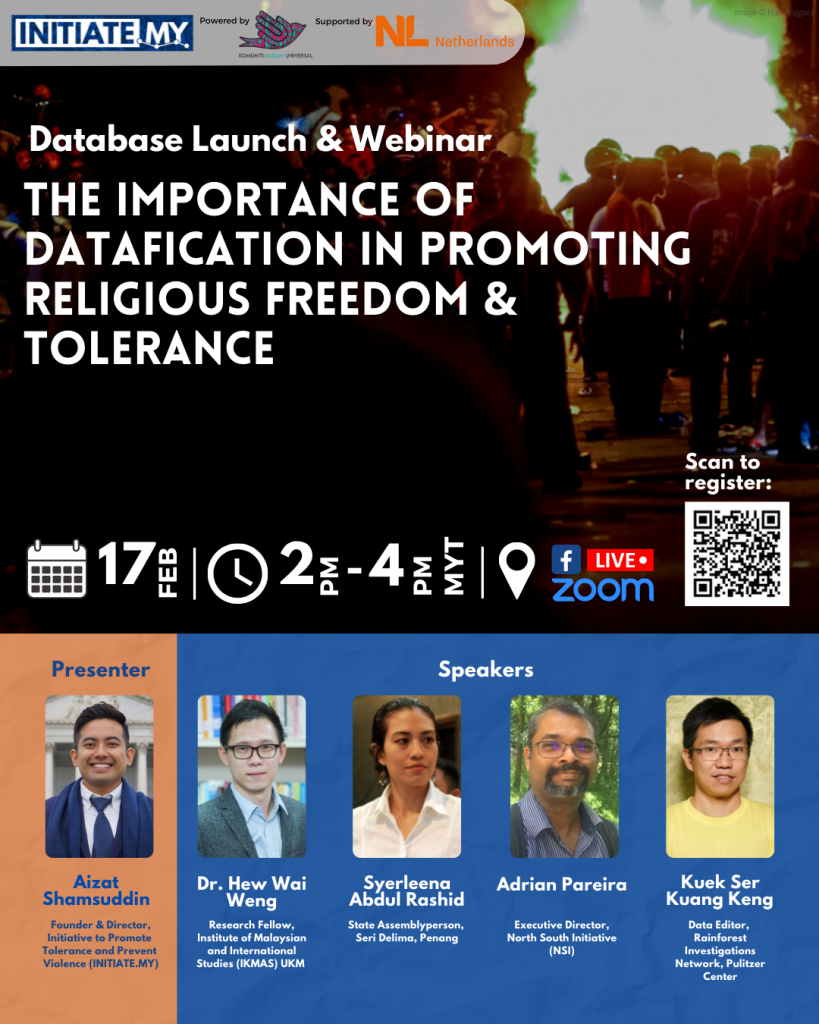 Religious freedom and tolerance are a pillar for a multi-religious and multi-ethnic society like Malaysia. In promoting this, the scarcity of data remains a challenge to produce evidence-based responses from the government or civil society actors. Datafication of laws and cases can help understand the level of restrictions and emerging trends that impact religious freedom and tolerance in a particular context. It can guide various actors to produce informed, appropriate and effective responses such as legal reforms or advocacy programmes to address the matter at hand.

Thus, at this event INITIATE.MY will launch its first Databases on religious freedom and tolerance, and further explore the importance and challenges in relation to this issue in a webinar with eminent speakers from diverse backgrounds.

Aizat Shamsuddin is an analyst and practitioner in the prevention of violent extremism (PVE), good governance, and human rights. Since 2015, he is the founder and project coordinator of Komuniti Muslim Universal, a non-profit organisation founded by former radicalised youth to counter extremism through counternarratives, dialogues and preventive policy engagements and more recently data developments in Malaysia and Southeast Asia. In recognition of his work in peace and security, he received Australia Awards scholarship from Australian Department of Foreign Affairs and Trade and ASEAN in 2018. Then, he completed his master’s degree specialising in counterterrorism, conflict studies and political Islam from the University of Melbourne in 2020. As part of his global network in counter-extremism initiatives, he is an alumnus of German Institute for Foreign Cultural Relations and American Council of Young Political Leaders since 2018. Aizat is also trained in Sharia and law for 5 years at the Islamic Science University of Malaysia. His altruistic hope is to make the world a better place.

Dr. Hew Wai Weng is research fellow at the Institute of Malaysian and International Studies, Universiti Kebangsaan Malaysia (IKMAS, UKM). His research interests include the intersections between ethnicity, religiosity, class and politics in Malaysia and Indonesia. He writes about Chinese Muslim identities, Hui migration patterns, and urban middle class Muslim aspirations in Malaysia and Indonesia. He has been a visiting fellow at ISEAS-Yusof Ishak Institute, Singapore, and Zentrum Moderner Orient (ZMO), Berlin. He is also the author of ‘Chinese Ways of Being Muslim: Negotiating Ethnicity and Religiosity in Indonesia’ (NIAS Press, 2018).

YB Syerleena Abdul Rashid is currently the elected State Assemblyperson for Seri Delima in Penang. Syerleena had previously been appointed as a Councillor of the Penang Island City Council, serving for over three years between 2015 and 2018. She is also Democratic Action Party (DAP) Penang Assistant Publicity Secretary and DAP Wanita National Executive Committee Member. In addition to her political involvements, Syerleena had been a columnist for The Malaysian Insider and contributed extensively in various online news portals. She was also formerly a member of Aliran, a local non-governmental organisation, as well as an anti-human trafficking movement.

Adrian Pereira is the Executive Director and co-founder of North-South Initiative (NSI), a Human Rights and Social Justice orientated organisation based in Malaysia. NSI’s mission is to build a society that prioritises social justice via solidarity building. Adrian has also been involved in human rights and faith related advocacy as a member of Pax Romana.  Besides interfaith dialogues in Malaysia, he has been working with young Muslims from Patani on conflict resolution via an internship program at NSI. This has helped in building strong solidarity between Malaysian and Patani youth over the years.

Kuek Ser Kuang Keng is the data editor of the Rainforest Investigations Network established by the Pulitzer Center. He is also a data journalism trainer and media consultant based in Kuala Lumpur, Malaysia. Partnering with regional journalism organisations including Google News Initiatives, WAN-IFRA and Internews, he has been conducting regular digital journalism workshops since 2018, reaching over 1,000 journalists in Asia. He also provides consulting and mentoring to media organisations in data, visual and interactive journalism.