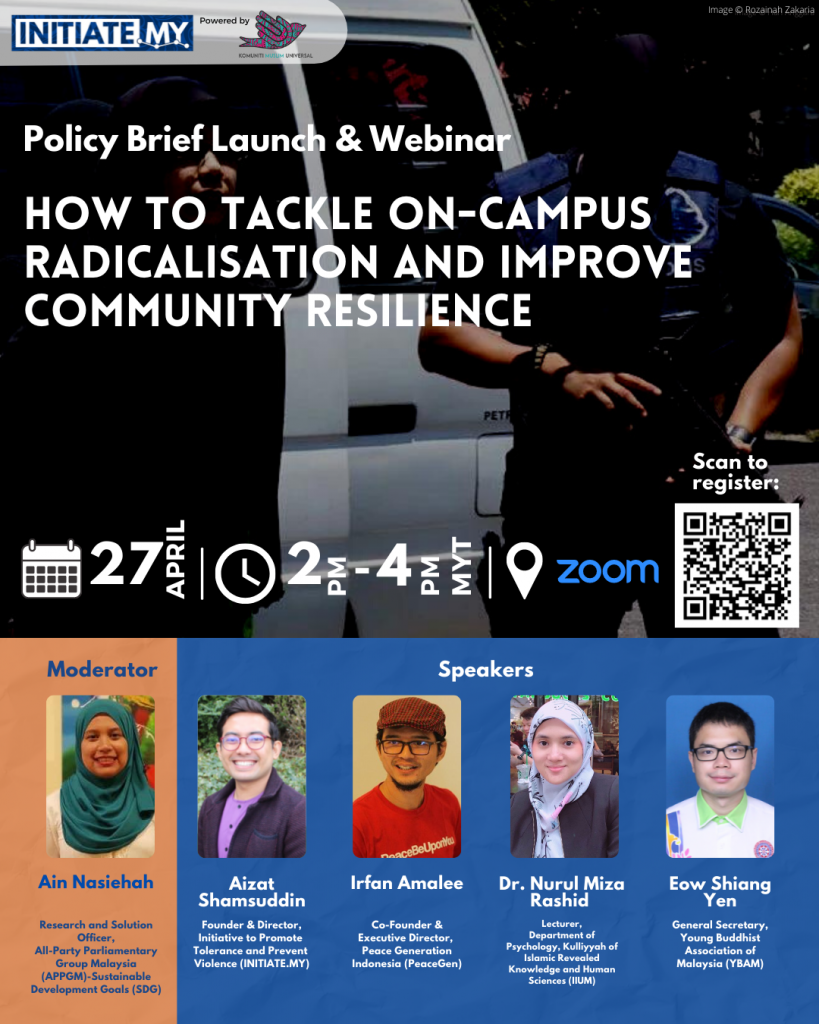 The spread of global terrorism from Islamist terror groups like Jemaah Islamiyah (JI) and Daesh/ Islamic State (IS) has arrived at the doorsteps of Malaysian campuses to radicalise and recruit our youths by exploiting their passion, curiosity, and anger about the world, religion, and injustices. Despite the collapse of their movement, their ideologies and networks remain intact and can reemerge in newer manifestations whenever emboldened by global and domestic political developments.

Radicalisation is a process with various ideological, operational, and structural drivers. However, given the complexity of this problem, university administrations do not yet have the right mechanisms in place to address it. They can only cooperate with the police to deal with terrorist-related crimes committed by university students and staff, such as possession of jihad reading materials or membership of a terrorist organisation. Clearly, this is not enough to address the problem.

Hence, this webinar will discuss the problem of on-campus radicalisation and recommendations for a more holistic early response from the university administration and other stakeholders such as the police, civil society organisations (CSOs), and the campus community. They should play a collective and proactive role in tackling radicalisation with a long-term goal of building campus-community resilience.

Ain Nasiehah works in the development sector specialising in gender and peace-building especially in Southeast Asian context. She has recently joined the All-Party Parliamentary Group Malaysia (APPGM)-Sustainable Development Goals (SDG) as their Research and Solution Officer. She is also a research officer at the Initiative to Promote Tolerance and Prevent Violence (INITIATE.MY), an Asian Youth Peace Network (AYPN) member, a Southeast Asian youth network working on peace and conflict in the region. She has work experience in relation to project management, consultation, facilitation and research. Previously, she had also been involved in the capacity building of different segments of women in the community, from young women, refugees, migrants, indigenous people to professionals at the local level. She had 7 years of experience working with a number of local women’s rights organisations namely, All Women’s Action Society (AWAM), Tenaganita (refugee and migrants organisation) and Selangor Women’s Empowerment Institute (IWB).

Aizat Shamsuddin is an analyst and practitioner in the prevention of violent extremism (PVE), good governance, and human rights. He leads CSO-government preventive policy engagements, inter- and intra-faith dialogues, and more recently digital data developments to prevent extremism in Malaysia and Southeast Asia. Besides, he founded Komuniti Muslim Universal in 2015 with other former radicalised youths to counter extremism with counternarratives. In recognition of his work in peace and security, he received Australia Awards scholarship from Australian Department of Foreign Affairs and Trade and ASEAN in 2018. Then, he completed his master’s degree in 2020 specialising in counterterrorism, conflict studies and political Islam from the University of Melbourne. As part of his global network in counter-extremism initiatives, he is an alumnus of German Institute for Foreign Cultural Relations and American Council of Young Political Leaders since 2018. Aizat was also trained in Sharia and law for 5 years at the Islamic Science University of Malaysia. His altruistic hope is to make the world a better place.

Irfan Amalee is the co-founder and executive director of Peace Generation Indonesia (Peacegen). He founded Peacegen on the idea that young people can develop and practise their own approaches to peace, tolerance, and nonviolence as a deliberate alternative to the growing influence of religious and political extremism. By working with religious organisations to reach adolescents, Irfan aims his work at schools, extra-curricular clubs, and alumni networks where radicalization often takes place. He also has a Masters from Brandeis University (USA) and over 15 years of experience in publishing book and media for kids industry while serving as a CEO at Pelangi Mizan and Mizan Apps Publisher. He has published over 50 books, audios and videos including Encyclopedia for Muslim Kids, Islam for Kids, and 12 peace modules for kids. Irfan has awards including International Young Creative Entrepreneur 2008, UAJY Multiculturalism Award 2010 and Young Creative Enterprise from Kemenparekraf 2012. Irfan is also recognized as one of the 500 most influential Muslims in the world by the The Royal Islamic Strategic Studies Centre – RISSC, Aman, Jordan.

Dr. Nurul Miza is a lecturer at the Department of Psychology, Abdul Hamid Abu Sulayman Kulliyyah of Islamic Revealed Knowledge and Human Sciences, International Islamic University of Malaysia. Nurul Miza teaches psychology courses including Media Psychology for undergraduates. She recently finished and passed her thesis on identifying risk factors of radicalisation in Malaysia at the same university she is currently teaching. She is currently in the work of building a rehabilitation module of ex-detainees and women in prevention against violent extremism. Her other research includes examining the dissemination of ideologies related to non-normative mindset through social media.

Eow Shiang Yen is an alumnus of INITIATE.MY’s Peace Lab for Youth (PLY). He is currently a Doctor of Philosophy (PhD) student in Community Nutrition at the Department of Nutrition, Faculty of Medicine and Health Sciences, Universiti Putra Malaysia (UPM). His research focus is on maternal and infant gut health. He is also active and undertaking the leadership position in a number of youth- and religious-based organisations, including Executive Committee of Malaysian Youth Council (MBM) and General Secretary of Young Buddhist Association of Malaysia (YBAM). He is a peace-loving and easy-going individual, and he enjoys working with people of different backgrounds and celebrating differences instead of magnifying them.