Policy Brief Launch and Webinar on ‘How to Tackle Hate Speech, a Driver of Intolerance in Malaysia’ 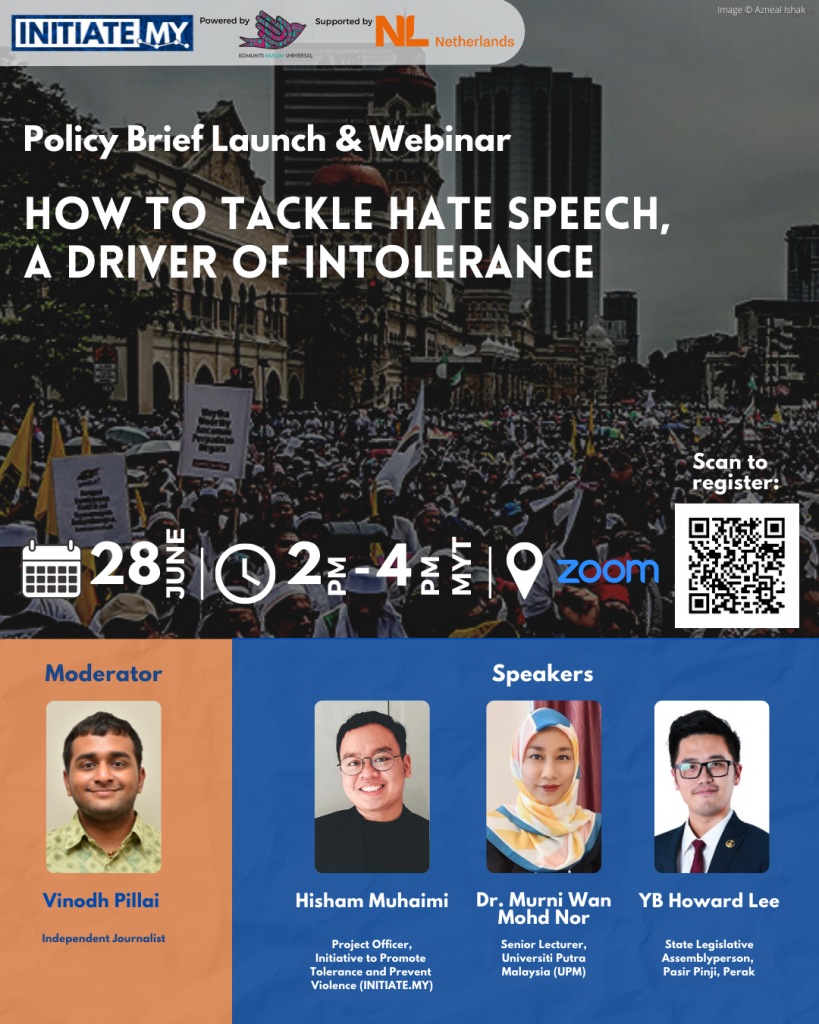 Hate speech plays a role in polarising society as it can lead to intolerant actions between groups of people. This is especially dangerous in Malaysia, where race and religion are often politicised by political and religious actors for political or personal gain. Things are also getting worse; following the 2018 general election, a spike of intolerant cases motivated by racism and religious hatred was reported by INITIATE.MY. In these cases, political and religious actors were observed to have used hate speech to stir public fear and anger, and mobilise protests and clashes. Although such actions are usually dealt with by the authorities through criminal prosecution, this is far from enough to tackle a multifaceted and complex problem such as hate speech. Legal reforms and restorative justice approaches must be prioritised as well to holistically tackle hate speech as the driver of intolerant actions by focusing on public education and providing redress mechanisms for victims of hate speech.

This webinar aims to discuss the problem with hate speech regulations in Malaysia and propose holistic recommendations to tackle hate speech that leads to intolerant actions.

He is an independent journalist, editor and human rights advocate. He has spent most of his career platforming those without a voice and pushing for more stories of lived realities. He has done this through his previous work as a news reporter and human rights programme officer, and continues to do so on a freelance basis. His most recent written work, the Queer Lapis Sex Work Series, was published last year, and aimed at destigmatising sex work in Malaysia. Vinodh has had bylines on news portals such as Malaysiakini, Free Malaysia Today, CodeBlue and Cilisos. He was previously attached to civil society organisations like the Galen Centre for Health & Social Policy (2019-2020) and the Centre for Independent Journalism (2020-2022), where he worked on health and freedom of expression/media freedom reforms, respectively. He is currently working with UNICEF Malaysia on a project highlighting the stories of children affected by migration. Vinodh holds a Bachelor’s degree in professional communications from the International University of Malaya-Wales.

He is a Project Officer of the Initiative to Promote Tolerance and Prevent Violence (INITIATE.MY) since 2021 and a member of KMU Malaysia since 2017. His active involvement includes conducting advocacy training, workshops and seminars with youths and other stakeholders to promote the inclusion of religious minorities and gender equality, and the prevention of violent extremism (PVE). He has an educational background in Shariah and law from the Islamic Science University of Malaysia.

She is a Senior Lecturer in Universiti Putra Malaysia (UPM) holding a PhD in Law. Her focus is on the issue of hate speech, the harms it brings, and the need for specific legislation. Her current research interests extend to media representation on racial and religious issues, Islamophobia, as well as combating hate speech and fake news within the community. Dr Murni cares deeply for fostering racial unity and interfaith understanding; having written a number of published articles on the matter and organised successful interfaith dialogue sessions. She has held several consultancies on human rights and hate speech-related projects such as with The Centre, UNDP and CENTHRA. It is her hope that the usage of hate speech and its negative impact can be lessened through the introduction of a comprehensive and holistic framework to address hate speech.

He is a Malaysian politician, currently serving his second term as the Perak State Legislative Assemblyman for Pasir Pinji (N.27) as well as Democratic Action Party Central Executive Committee member. He has risen to the top of every youth political organisation he has been affiliated to, including the worlds’ largest Youth Political organisation in the world- the International Union of Socialist Youth (IUSY) as its 24th President. During his tenure, he was the global focal point for SDG8 under the auspices of the United Nations Major Group for Children and Youth (UNMGCY) He was also DAPSY (DAP’s Youth Wing) National Chief, and was also the Pakatan Harapan Youth National Chief. During the 22 months of Pakatan Harapan’s rule, He was the Perak State Government Executive Council Member for Youth & Sports Development. His specific areas of policy interests include Human Economy, Food security and supply, TVET, Tourism and service based economy.