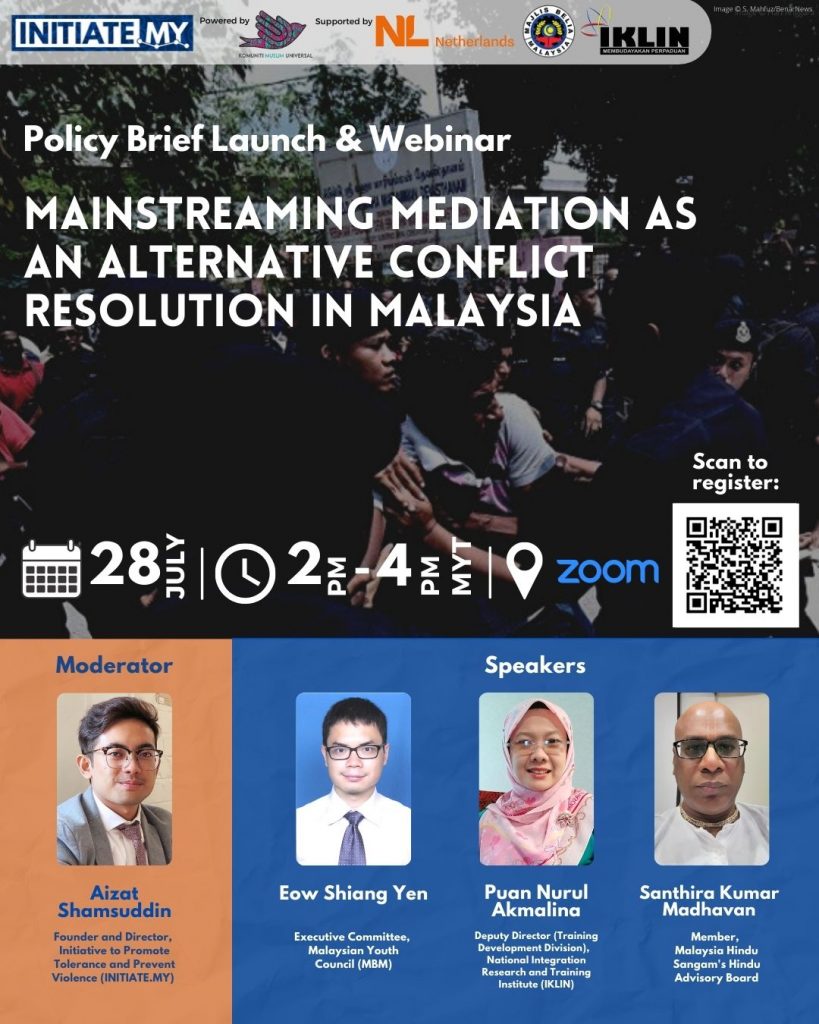 Malaysia prides itself on a unique pluralistic society comprising members from diverse ethnic and religious backgrounds. This peaceful coexistence and integration is possible due to the high level of compromise and tolerance between all ethnic and religious groups. While there have been dark moments that threatened the hard-won peace (such as the violent riots of May 1969), Malaysia has always managed to move past it and come back stronger.

Unfortunately, a worrying trend of interracial conflict is re-emerging in contemporary Malaysia. INITIATE.MY’s database captured an alarming increase in intergroup conflict motivated by religious hatred and racism, especially around the 2018 Malaysian general election. Among others, this trend was mobilised by far-right leaning actors who instigated fear and anger among their followers and a wider public sympathetic to their cause. Most attempts to resolve these conflicts were top-down and punitive in nature, which was ineffective over the long run.

Given the urgency, this webinar will explore the problem of intergroup conflict in Malaysia and propose mediation as an alternative option to prevent conflict and promote community resilience with full consideration of targeted stakeholders.

Researchers, NGOs, policymakers and enforcement agencies (local and international) in the fields of religious freedom and conflict resolution.

He is an analyst and practitioner in the prevention of violent extremism (PVE), good governance, and human rights. He leads CSO-government preventive policy engagements, inter- and intra-faith dialogues, and more recently digital data developments to prevent extremism in Malaysia and Southeast Asia. Besides, he founded Komuniti Muslim Universal in 2015 with other former radicalised youths to counter extremism with counternarratives. In recognition of his work in peace and security, he received Australia Awards scholarship from Australian Department of Foreign Affairs and Trade and ASEAN in 2018. Then, he completed his master’s degree in 2020 specialising in counterterrorism, conflict studies and political Islam from the University of Melbourne. As part of his global network in counter-extremism initiatives, he is an alumnus of German Institute for Foreign Cultural Relations and American Council of Young Political Leaders since 2018. Aizat was also trained in Sharia and law for 5 years at the Islamic Science University of Malaysia. His altruistic hope is to make the world a better place.

He is the Executive Committee of the Malaysian Youth Council (MBM) and holds the portfolio of unity, national integration, and consumerism. He is currently a Doctor of Philosophy (PhD) student in Community Nutrition at the Department of Nutrition, Faculty of Medicine and Health Sciences, Universiti Putra Malaysia (UPM). His research focus is on maternal and infant gut health. He is also active and undertaking the leadership position in a number of youth- and religious-based organisations, including the General Secretary of Young Buddhist Association of Malaysia (YBAM). He is a peace-loving and easy-going individual, and he enjoys working with people of different backgrounds and celebrating differences instead of magnifying them. He attended the Certificate in Inter-religious Mediation (CIRM) course co-organised by Department of Unity and National Integration and International Islamic University Malaysia (IIUM) in 2019 and obtained the CIRM and Certificate of Foundational Mediation Practice, issued by the IIUM and Australiasian Peacebuilding and Conflict Management Consortium, respectively. He is also an alumnus of INITIATE.MY’s Peace Lab for Youth (PLY).

She is the Deputy Director of Training and Development Division at the National Integration Research And Training Institute (ILKIN). She oversees the training of mediators under the Department of National Unity (PERPADUAN) for Certificate in Inter-religious Mediation (CIRM) course and recently known as Social Mediation between 2018 and 2022 to produce ‘community mediators’. She has the background of Political Sciences from the International Islamic University Malaysia. She is also a certified mediator. Prior to this, she worked at the PERPADUAN in both Selangor and Sabah before being transferred to the Putrajaya office serving as the Director of PERPADUAN. She then served as the Principal Assistant Secretary at the Interfaith Harmony Section, Community Relations Division of the Ministry of National Unity.

He is a member of Malaysia Hindu Sangam’s Hindu Advisory Board and a member of the International Society for Krishna Consciousness. Santhira Kumar Madhavan has a LLB background from University of London in 1992. He then became a student monk at the age of 24 soon after he graduated. He attended the Certificate in Inter-religious Mediation (CIRM) course co-organised by Department of Unity and National Integration and International Islamic University Malaysia (IIUM) in 2019 and obtained the CIRM and Certificate of Foundational Mediation Practice. He is a social worker who actively helps those who are struggling with identity crisis in their identification card such as Hindus who are classified as Muslims. Santhira is also a Spiritual Counselor, a teacher of Hindu scriptures and an accomplished cook.